Creating a simple guide to ed tech for my organization. 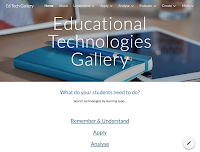 Recently, my supervisor asked the inevitable question: "could you give us a list of all the technologies available for learning?"  Naturally it's hard to respond with other than vague bewilderment.  The question is at once both strangely naive and yet totally reasonable...


Forced to provide a solution, and  knowing an actual "list" would be wholly inadequate - I hit Google imagining there must certainly already be something out there.  Something interactive, thorough, clever, informatives...at least just interactive enough to allow micro-learning or drilling down into details. Something to start with at least.  Well... not so much.

Perhaps because the landscape is so relentlessly changing or perhaps because the answer to my supervisor's question is far more workplace-specific than we'd hope it to be, I turned up nothing, so I'd need to make one myself.  My criteria were few but specific: that the resource should be...
So I settled on a startlingly simple solution: A google site structured around learning goals (NOT around technology types.)  This spoke the language of learning while discouraging the tech-led mindset that so often leads the way (I HAVE to use VR because it's all the rage.)  It would have taken me 6 months to do what I did in a week with Google sites had I used our corporate CMS (which is possibly why no one in my institution had done it before).  I considered a wiki initially but found, on experimentation, that this violated the "Utterly simple" criteria as it introduced clutter and confusion.

While the resulting EdTech Gallery website is early stages, simplistic and un-apologetically targeted to the staff of my particular organization, I thought it might still prove a useful resource for others, if only as a starting point to creating something similar for your organisation, tweaked to the provisions and needs of your particular teachers and learners.  For this reason, I have made it public.